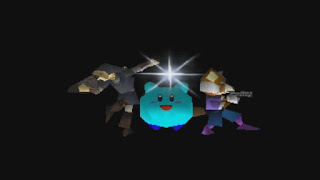 IT'S GOING DOWN!
OK, so I did not know I could do this in Blogger, but I guess that's one good point for the new layout.
Anyways, if you never had anything better to do and you've been following my YouTube exploits since the beginning, you may have heard of a scrappy, little machinima called Reycralibur. This summer, after far too long, I'm paying my respects to the show that started it all. The reason why it took me so long to get around to this, aside from somehow losing all the project files every single time time I try to do this, is because I felt like I needed to go all out. This isn't just some crappy high school web series I've dug up, Reycralibur was supposed to be my magnum opus: a series unlike any other machinima done in the original Smash Bros game. It only felt right to give it a proper reintroduction (and funeral) for my current viewers.
The core of this project will be a series of personalized marathons in the vain of The Abridged Knights of Brawl commentary, in addition to supplementary material posted on the blog. These will include further commentaries, stories and reflections, and when all is said done, one final never before released...thing. So check back here, my alternate YouTube channel, Vlare and VidLii throughout the next couple of weeks.
Did I mention I'll be done with long-form machinima series once I've finished NS3U? I'm really looking forward to that.
Labels: Reycralibur