It's been a year since I've released it, but The Smash Sisters Series trailer has become one of my most popular videos and viewers still want me to do a full version of "2 Femme 2 Furious". 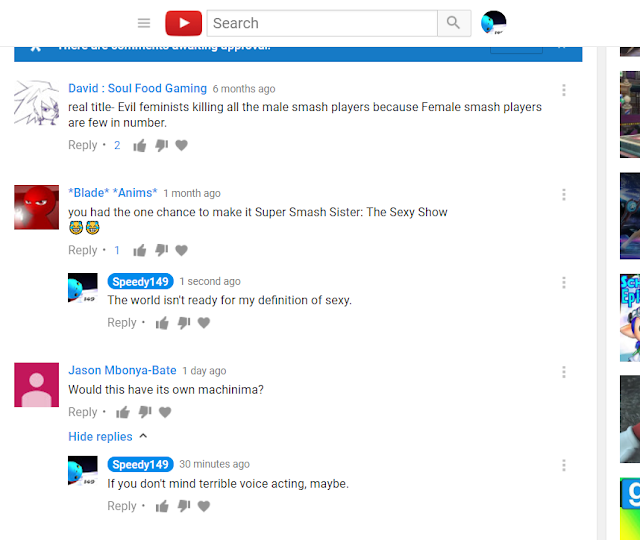 Who am I to ignore them, especially when nobody else watches my videos anyways? So, by popular demand, the next installment of "The Series" (working title) will take us back to the reality depicted in "2 Femme 2 Furious"! I've also finished the script for another episode in the "main continuity" that I will produce after I finish this. As I mentioned before, the Great Mission mini-series is more of a standalone prequel, so don't expect the actual series to be anything like that or "2 Femme 2 Furious".

Call it a midlife crisis, but I've deleted almost all episodes of Typhoon School and Reycralibur from my main channel. As I mentioned in a previous update, I'm deleting low-performing videos from my main channel; expect to see a lot of pre-2015/Pre-SmashVine content gone. If you wish to see all episodes and supplemental material for both Typhoon School and Reycralibur, head over to the playlists on my archival Dailymotion channel.

I can't tell you how much of a PAIN it is to navigate Dailymotion. I mentioned on my last update that I wanted to put more focus on my older videos, at least the ones that I personally liked. As convenient as it is to shove all of that content onto another website, barely anyone uses Dailymotion. On top of Dailymotion's piss poor navigation making it hard for anyone to find my videos (EVEN ME!), no one who has heard of me on YouTube would even bother following me on Dailymotion.

I also don't trust the new "premium" direction Dailymotion's taking; I fear they might consider the possibility to removing all user-generated content from the website in favor of sponsored content. They got rid of all the porn, so anything's possible. I still have use for SpeedyCXLIX as a channel for content that wouldn't fit on my main channel (including other people's "trash"), but I'd rather focus on that then repurposing the channel for my older videos because, to my point, my older videos wouldn't fit on a channel filled with old commercials, promo videos, and TV idents, as well as deleted content from other YouTube channels.

So why not use TheAbridged149?

Personally, I'm anxious to go beyond Smash Bros. machinima and do something different. Something more, dare I say, "mainstream"? I've already tried let's play's, abridged parodies, remixes (I miss doing those), comic dubs, old school commentary videos, rants (Never Again.), and YouTube poop videos. Nothing seems to work, and I DID NOT have fun making the stuff that actually got me attention. In the near-decade I've been doing this YouTube thing, I've only recently began to take this seriously. So maybe its time for me to revisit some of those older video genres with a renewed focus?

Whatever I decide, I want to keep TheAbridged149 open as a blank slate. A third option, if you will.